During WWI, John F. Grennan, known by his friends as Jack, was wounded in Germany on June 6, 1918 and passed from wounds June 6 or 8, 1918.  He was the first Clallam County son to die in the World War.

The first officers for Post #62 were:  Commander: Harry D. MacArthur, Treasurer:  Paul A. Davis, and Secretary:  A. A. Bugge. 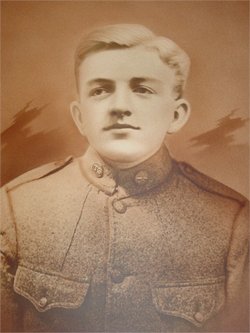 Over in a hospital somewhere in France there is a young man from Sequim, battling for his life, severely wounded in action—and his name is John F. Grennan, popularly known as Jack Grennan, son of Mr. and Mrs. Fenton Grennan of Sequim.

This young soldier who enlisted when the United States declared war on Germany, was in the marine service and the American Marines are known as great fighting men—always place out in the vanguard where somebody has started something.

The following message was received by Mr. Grennan last Saturday:

Washington, D.C. July 6, 1918.  Regret to inform you cablegram from abroad states Private John F. Grennan of marine corps was severely wounded in action between June 5 and 8.

No further particulars available.  Official cablegram can not be sent, asking about his condition, but you will be informed of any details received—George Barnett, Maj. Gen. Commanding.

Mr. Grennan and his friends are hopeful that no news is good news in this case, and confidence is expressed that the wounded soldier is making recovery since it is a month since he received his injury.

Jack enlisted two years ago at Seattle, and from that point was send to San Francisco for training and later to Quantico, Va. From which latter point he embarked for France.  He is 22 years of age and is known as a young man of strong physical force and reserve.  That this splendid constitution will stand him in good stead now is certain.

George, another son of Mr. Grennan, registered for service at Sequim a few days ago, having reached his majority since the first draft.

Speaking of his son’s injury, and with full confidence that the boy is pulling thru all right, the father expressed his confidence that Jack got a Hun or two before they got him—and everybody will agree that if he had a fighting chance, the Hun now knows what it feels like to receive a package from a Seqium boy on the fighting lines.

With all available army and hospital records obtainable, and all letters of a personal nature summed up, and with the government’s issue of a certificate of presumptive death, the Fenton Grennan family has at last conceded that all hope of the son, John Francis Grennan, being longer alive is hopeless.

As far as the Press has information, Jack Grennan, as he was popularly known among his intimates at Sequim, was the first Clallam county boy to make the great sacrifice in the world war.

His passing adds another chapter to the failure of the army held hospitals to stand up under pressure as far as its records are concerned of the boys injured and taken there for treatment.

Private Grennan of the Marines fell in the fierce fighting on the field of Chateau Thirry where the Marines paid the awful price for victory gained.

In the engagement there on Jun 6, 1918, shrapnel struck the Sequim boy on the legs, wounding him badly.  So great was the losses in men wounded that for a long time Grennan lay unattended on the battlefield, his life ebby away.  When he was finally picked up by the first aid corps, he was extremely weak from loss of blood, according to a comrade from Enumclaw who was a buddy of Jack’s.

The Enumclaw boy saw Grennan taken to the hospital, and was told later by an army surgeon who was attending to Jack that it would be necessary to amputate the injured marine’s leg as the only hope for saving him.  The Enumclaw boy never saw Grennan again, and up to this day no records has been obtainable from the government, showing that he ever entered the hospital or was cared for or died there.  The official records are blank at this point as far as Grennan’s case is concerned.  The army red tape broke on account of inexperience and lack of preparedness.

Considering Grennan’s weakened condition when he was taken to the hospital for treatment, and the serious nature of his wound, and the fact that the official records kept of every many in the service fails to disclose anything, convinces the father of the boy that he died while in the hospital.

A Port Angeles soldier recently returned from service overseas, told Mr. Grennan that he saw Jack’s grave with this name, etc., on the little cross placed at the head of each soldier’s grave for identification purposes.  Other information, much of it conflicting, has been received, but in summing up all the information obtainable, the conclusion points unmistakably now to the passing of the Sequim marine, probably on Jun 7, 1918.  In its issuance of a certificate of presumptive death, the government necessarily takes June 6 as the date of his death, that being the last date on which the records agree.

Marine headquarters has been giving the Grennan family all the help possible in fathoming the details in connection with Jack’s passing from the records after he was taken to the hospital.

It may be that in time the government will be able to work out the missing details.  Till then the official certificate will stand of record.

“Since the conditions called for men to bear the brunt of their nation’s battles, and since fate chose my boy in the list of victims of war, I am proud that he rendered good service to his country and that he died in so noble a cause,” said the father of Jack Grennan to the Press.

When the veterans of the east end of Clallam county, who wore the colors of their country in the great war, met at the Grand Army Hall in Sequim last Tuesday evening to organize a local post of the American Legion they paid a most gracious and deserved tribute to a comrade who gave his life in his country’s cause when they voted unanimously to name their post “Jack Grennan Post of the American Legion.”

And for all time to come, that name will be carried on the official records of the origination as a monument to the patriotic Sequim boy who sleeps on the fields of France.

In the election of the first officers of the post, the following were put in charge of affairs:

Commander MacArthur was elected to attend the state convention in session in Seattle the last three days of the week.

The next meeting of Jack Grennan Post will be held at G. A. R. Hall on Tuesday evening, Oct 21, when a report of the state convention will be made by Commander MacArthur.

The war veterans are of the opinion that the local post will have a membership of about 100.  This includes all the district east of McDonald Creek in Clallam county and the near-by part of Jefferson county.
Copyright 2022, American Legion Post 62, Sequim, WA